This fall I decided it was time to update my Atom based media server to a more power version.This was driven mainly by the want to rip and encode blu-ray disks and run KVM for virtualization. While the Atom setup was great for power efficiency (using about 40 watts at peak load) there were other tweaks I wanted to make. Below is my new system specs for Jezebel 7.0: 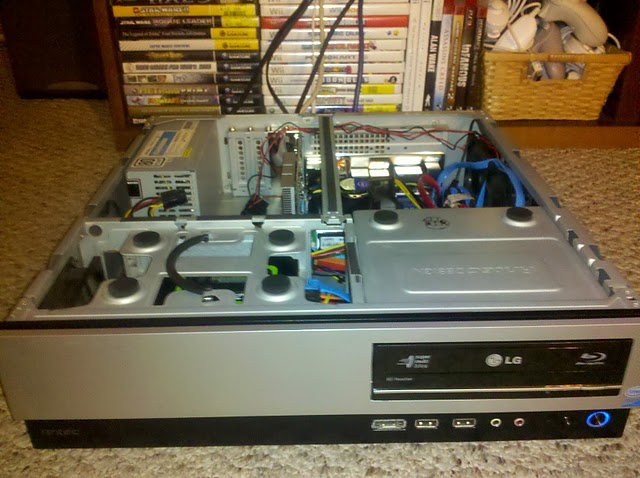 All of the parts were new except the case and blu-ray drive since they integrated without a problem. I originally purchased a micro-ATX motherboard which had more PCI, memory, and SATA slots, but the majority of the SATA connections went right up against the drive bay wall. The smaller board had less expansion space but fit better into the case and didn't limit any of the other components I purchased.

I went through about 4 graphics cards before landing on the GT430. Two were too large, and one was passively cooled but used a ton of power and put out a lot of heat. The GT430 has a fan on it that is a bit louder than I would have liked, but it can underclock itself when not in use to 50MHz to save power and heat. The GT430 is a bit overpowered for what I wanted to do, but it's CUDA support has me hoping for encoding programs like ffmpeg to use it for faster blu-ray encoding.

By far the biggest improvement is the quad-core processor, with two cores and 4 gigs of memory dedicated to KVM for a Windows XP guest install. I haven't tested it for video encoding yet but it has turbo-boost to go to 3.0GHz if needed. I also enabled an on-demand CPU governor and it runs at 1.2GHz while idle. 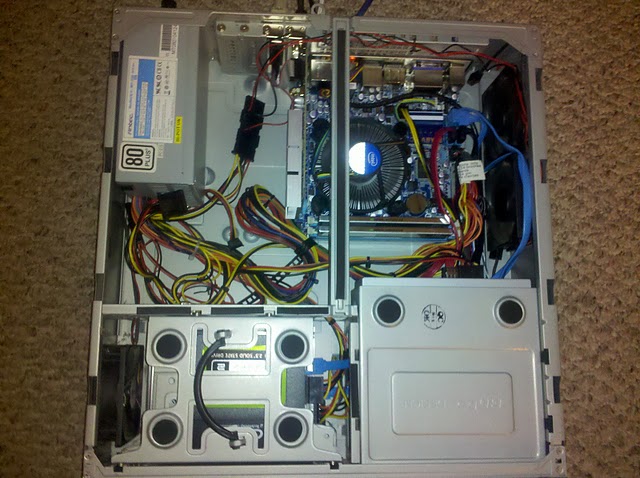 The drive setup was a big improvement as well. Before it was running the OS off a compact-flash card plugged into a parallel IDE connection, two 1TB drives on the onboard SATA, and the blu-ray into a SATA PCI card. This was less than ideal from an IO perspective and was still running on legacy technology. The new board has 4 SATA connections and I swapped the two drives for one 2TB disk. The SSD has shown a huge IO boost and the OS boots in less than 10 seconds. The 2TB drive is actually slow at 5900 RPMs, but it makes it quieter and is very power efficient.

The system setup is 64-bit Debian Squeeze installed onto the SSD, with /home all on the large disk. I also installed Windows XP into a KVM guest which resides on the SSD as well. GNOME is setup and running off the video card. HDMI out works for video and looks great, however I kept getting stumped on trying to pass sound through it and settled on a 1/8 audio connection from the line out.

The main use of the system is for pushing out content to our LCD TV via a variety of methods which I'll explain in a different post, and ripping/encoding DVD and blu-rays. It's also hooked up to our LCD TV and the wireless Apple keyboard and mouse is great for a living room setup with a range of approximately 10 meters. 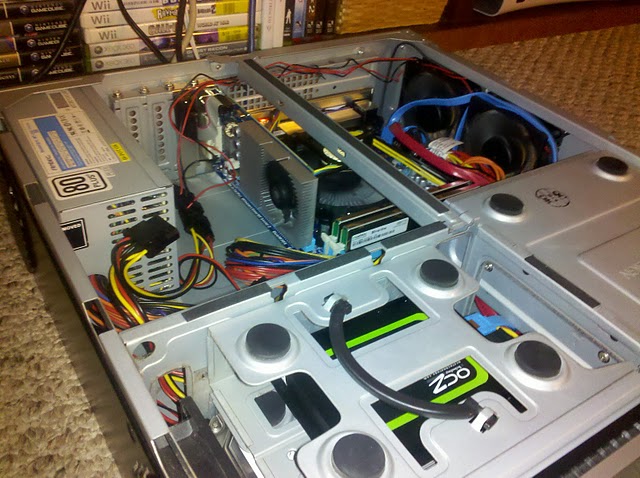 Overall the system uses more power than the Atom setup, but the performance ratio makes up for this exponentially due to the advances in efficiency of the other components over the last few years. I'm looking forward to seeing what this system can do with it's virtualization capabilities and performance capabilities.
On some future notes, the next Intel architecture Sandy Bridge is looking to integrate video directly into the CPU. I looked into the on-die graphics available now since this motherboard can support them, but unfortunately the only Core i series CPUs that have it are dual core. Sandy Bridge will have 4 and 6 core CPUs to use it, but it will use a different socket, making this board unsuitable for it. Soon though we'll have HTPC systems like this that don't require any additional peripherals, increasing performance while at the same time driving down power usage even more.