One Day With the Galaxy Nexus

Almost two years ago I traded in my LG flip phone for an original Motorola Droid. At the time I was blown away with how customization and responsive Android could be on a device that fit on my pocket. After a solid run of daily use, ~2G monthly bandwidth usage, and countless custom roms and hacks later it was finally time to retire it.

To find a suitable replacement I started making a checklist in my head of what I wanted in a new device:

These all started to show up in devices in the fall of 2011 when Google had a streaming online event showcase their new Nexus device and release of Ice Cream Sandwich. Along with the Nexus two other phones made a debut, the Motorola Droid Razr and the HTC Rezound. After reading multiple reviews, release delays, and countless speculation I finally decided to get the Samsung Galaxy Nexus.

The Motorola Razr had many benefits going for it. The first is after owning a Droid and Xoom I have had hands on experience with the build quality and reliability with the type of hardware Motorola produces. The Gorilla glass and kevlar backing seemed like a perfect combination for a sturdy and solid phone. Also the Razr has many accessories that would compliment it and continue the daily conveniences that I was used to with the Droid such as a car and media dock. However the lack of a NFC chip and size of the phone (width, not depth since it is a extraordinarily thin) were playing against it.

The HTC Rezound on paper seemed like a winner, especially with all the high praise the screen was getting for being the best and highest definition. It also had the bonus of having a Qualcomm Snapdragon chip in it at 1.5Ghz, 300Mhz faster than the other two. The cameras also outclass the other devices. It too lacked the NFC chip though and unfortunately previous experience with a HTC Touch Pro left a bad taste in my mouth even years after I last used it.

Finally it came down to the Samsung Galaxy Nexus. While the other two phones had the advantage in processor and build quality he Nexus had the overwhelming advantage of being a "pure" Google phone and being built specifically for ICS. While the Razr and the Rezound will most likely get ICS in the near future, they will still have the hardware buttons reminding me every time I use it after the ICS upgrade that they are outdated and useless. The NFC chip was also a major factor, not because currently it's unused, but because in the next few years it will be more used. While Google Wallet may be blocked at the moment, because it is a Google device and rooting/hacking it is easier the limitation is almost moot.

After an adventure on getting the phone, since some retailers won't sell the device unlocked for full retail, or other stores were sold out. My fiance and I finally got on at Best Buy a few minutes before they closed. Since my phone plan is through my employer (hence the Qualcomm criteria above) activating it on LTE will have to wait until approvals go through to port the number and get a SIM card.

After using it all night and this morning on our wireless-n network I can already say I love it. It's extremely responsive and the new additions in ICS such as the soft keys, folders, and familiarity of Gingerbread really make it a pleasure to use. Strangely with folders I really only use one home screen and only have the power bar widget on the other 4 screens. 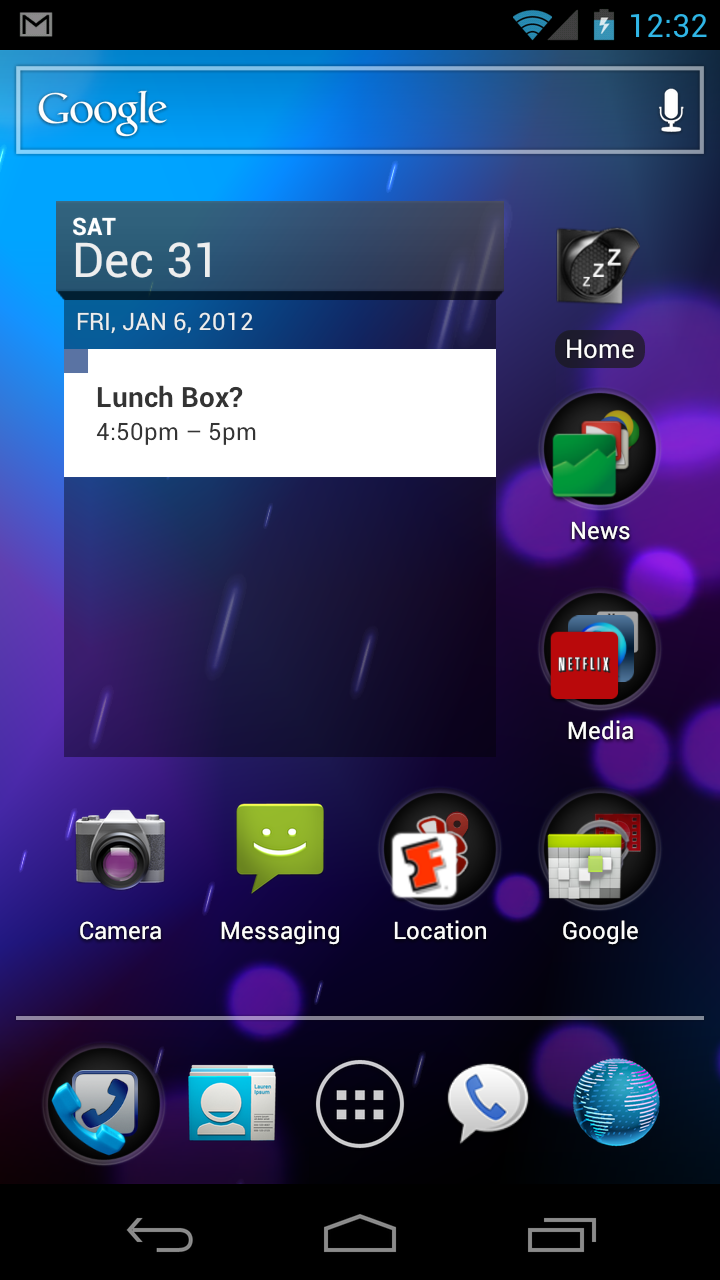 Since the phone isn't on Verizons network at the moment it couldn't make or receive calls. Since I use Google Voice I knew there must be some way to use VOIP with my Google Voice number on the device over a data-only connection. After a bit of searching I stumbled on Talkatone which allows you to use Google Chat to use your Google Voice number from your phone (you can see the app stacked with the normal dialer in the lower left menu). It works extremely well, and I had a hour long conversation using it with no interruptions (except when I was trying to play with the app settings mid call and accidently closed it).

After setting up Talkatone I know basically have a fully functioning Galaxy Nexus and have already started to love it even after only about 12 hours of use. I was at first concerned about the battery life after reading a few reviews. But apparently most of that is software related and I'm assuming with a few more patches to ICS it should last just as long as my Droid does. It also covers all the bullets points I listed above with the exception of the physical keyboard (which are rare anyway). I also originally thought it couldn't do HDMI out either, but it can do MHL (Mobile High Definition Link) that has a HDMI converter to hook up.

Even though the Galaxy Nexus may not come out on top in some categories the combination of all it's features added up to be a winner and I'm extremely pleased with it as a replacement for my Droid.